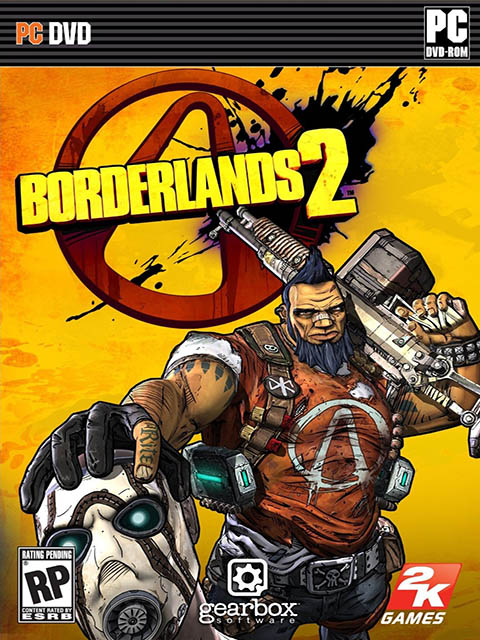 Stellar writing and a host of small improvements help Borderlands 2 stand tall on the shoulders of its predecessor.

There were a lot of things that made Borderlands such a great game when it came out three years ago: the hardscrabble planet, the oddball characters, the hostile creatures, the diverse missions, the abundant loot, the powerful skill trees, and the novelty of all these things combined in a cooperative first-person shooter. In Borderlands 2, the novelty is gone, but all of the other elements are back and better than ever. This sequel doubles down on the successes of the original and shores up its shortcomings, improving the familiar formula and delivering dozens and dozens of hours of immensely entertaining gameplay.

Perhaps the most notable difference is that Pandora now feels like a vibrant, living place. What once was a lonely frontier planet populated primarily by savage men and feral beasts is, well, still a planet populated primarily by savage men and feral beasts. But it isn't so lonely anymore, thanks to an expanded cast of diverse and entertaining characters. Many familiar faces return, including the delusional robot, Claptrap; the hayseed mechanic, Scooter; and the bawdy vixen, Moxxi. The four playable characters from the first game are back as well, and they each play a robust role in the story (and have way more spoken lines than ever before). There are some delightful new additions too, such as the arrogant antagonist, Handsome Jack, and the teenage demolitionist, Tiny Tina. Random townsfolk also have a few things to say, no longer content with mute or monosyllabic responses, and even the bandits you fight have a broader range of context-sensitive taunts.

The huge amount of high-quality voice acting required to bring this world to life is fueled by excellent writing, which provides some genuinely nasty tirades and surprisingly tender moments amid the avalanche of laugh-out-loud funny lines. The breadth of personalities invigorates your adventure and makes Pandora a lively, engrossing place, the kind of place it fell short of being in the first game. The only drawback to the sheer volume of communication is that sometimes conversations are cut off by other incoming messages before you can hear them through. This doesn't pose any barrier to progression, but with dialogue this good, you don't want to miss a word.

If you apply this same philosophy to exploration, Borderlands 2 will keep you busy for a very, very long time. The environments of Pandora are more vibrant and diverse this time around, and the eye-catching artistic aesthetic is enlivened with a richer color palette and more clever details. These elements dazzle in higher resolutions, outshining their console counterparts, and a full suite of visual settings helps you appreciate them while staying in a performance sweet spot. Diligent explorers will find both lovely vistas and amusing sights--the humor of the writing extends into the environmental design as well.

There are tons of areas to visit during the course of your adventure, some of which you won't even see if you don't stray far from the main story missions. The mission system is one area in which small tweaks have a noticeable impact. The onscreen checklist updates you of any mission progress caused by your current actions, even if said progress isn't for your currently selected mission. You can also choose to ignore missions in the menu so that you don't have to constantly scroll past old leftovers to get to the ones you want. It's not necessary to pursue every last mission en route to the final boss, but to stay at a competitive level with your enemies, plan on doing a fair number of side missions. These endeavors are another great source of creativity and humor, including a logic puzzle to decide which of four thieves cheated the others, and the ludicrously simple task titled "Shoot This Guy in the Face."

In addition to missions, there is an expanded array of challenges. These goals are automatically tracked and reward you for actions like offing a certain number of skags or getting a lot of incendiary kills. New location-specific challenges give you further incentive to find hidden secrets in each area, and this extra layer of reward makes idle exploration more appealing. Every challenge completed increases your badass rank, which in turn gives you small bonuses to various attributes (such as gun damage, fire rate, and shield recharge delay) that apply to any character you create, not just your current one. Tweaking challenges and introducing cross-character bonuses aren't big additions to the game, but they serve as a nice acknowledgement of the fact that many players want to play as multiple characters. This overarching reward system is one of the many small improvements that make Borderlands 2 a more player-friendly experience than its predecessor.

Intangible rewards are all well and good, but a huge part of the Borderlands formula is loot, and Borderlands 2 does not disappoint. Guns, shields, grenade mods, class mods, and relics all offer different ways to enhance your combat effectiveness. Building and updating your arsenal with the embarrassment of loot riches Pandora has to offer is still immensely satisfying, and the increased frequency of odd attributes and bonuses means more opportunity to fine-tune your optimal loadout. The option to mark items as junk in your inventory is a welcome addition that makes selling things to vending machines less time-consuming, though an option to mark items as junk on pick-up could have made it even smoother. The inventory screen seems to have been optimized for a controller and feels a bit clunky with a keyboard and mouse, but it's not hard to quickly navigate once you get the hang of it. In another bit of streamlining, cash, health, and ammo are now automatically picked up off the ground most of the time (there are occasional lapses), which means you can happily spend less time looking down.

Finding new and intriguing guns is fun, but using them on the legions of hostiles is even more fun. Whether human, animal, or somewhere in between, your foes put up a good fight, and different species are more than happy to fight each other, given the chance. There are some interesting new enemy types, including the goliath bandit who freaks out when you shoot off his helmet and starts killing anything nearby. Having him squash his allies is amusing and useful, but he grows more powerful with each kill, so you'd better be ready for the rampaging consequences. New creatures pose new challenges as well, like the skittering stalkers who can turn invisible briefly, and the hulking crystalisks whose crystalline shins are oh-so-punchable.

Despite your fresh foes, the core combat remains very much the same. Scoring critical hits and dealing the right kind of elemental damage can accelerate the demise of your enemies, and the fight-for-your-life moment can save you from your own imminent death if you manage to get a kill as you bleed out. The shooting mechanics are solid and satisfying, but action is largely unchanged from the first game, with the exception of slag. Slag is an element that weakens enemy defenses and amplifies damage from the other elements, making it a powerful tactical asset in many situations.

The four new characters also require new tactics to better leverage their new combat abilities, some of which are more exciting than others. Locking a foe up in a magical floating prison as a siren is more glamorous than simply whipping out another gun as a gunzerker. Though the latter has undeniable combat benefits, gunzerking is the only ability that doesn't offer something different from the core gunplay, merely an amplified version of it. The commando's turret adds a deployable asset to your arsenal that draws enemy attention, while the assassin's deception skill sets a decoy and lets you maneuver invisibly to set up for a damaging shot or melee strike.

Each of these base abilities can be customized in substantially different ways through the three different skill trees, enhancing replay potential even if you want to play as the same character. Though some skills favor certain weapon types, weapon proficiencies do not return in Borderlands 2, removing the incentive to stick with one or two weapon types throughout the whole game. You also have more freedom to tweak your character's appearance, as clothing colors and new heads are now loot items you can collect, and the menu gives you the welcome chance to actually see the results. There are lots of choices to make en route to the level cap of 50, but if you hope to max out, you have to start from the beginning in True Vault Hunter mode, a deadlier playthrough that scales to your level and stocks the fields and caves of Pandora with some gnarly new enemy variations.

Borderlands 2 provides a lengthy adventure, and one that gets better when you play it with friends. As before, online games can accommodate up to four players of any character class. A small icon denotes how well you are matched with potential players, and though the difficulty attempts to scale appropriately, it's best to play with someone close to you in level. If you accomplish later missions while someone else is hosting the game, you'll be given the option to skip those missions when you reach them on your own, which helps minimize the redundant play that was often the result of joining online games in Borderlands. A new item trading mechanic, tougher enemies, better rewards, and the excitement of battlefield camaraderie make cooperative play the absolute best way to experience the game.

Now if all this sounds familiar, well, you must have played Borderlands before. Borderlands 2 doesn't reach far beyond its predecessor's scope, but it does do almost everything better. Additions, refinements, and fixes all combine to create an appreciably improved experience, one that fully delivers on the promise of the first game. While Borderlands felt empty at times, this sequel is bursting with content and brimming with life, making it an absolutely delightful way to spend hours and hours and hours of your free time.
Courtesy: Gamespot
Last edited by PirateBoy on 14 Aug 2013, 15:10, edited 1 time in total.
Peace Tranquility
Drunk N High
Chilled N Relaxed
Thats How We Get By

just out of curiosity,is it poss. to remove the cartoon effect from borderlands2?
san andreas has an enb series effect.txt file from oCain's-Effect-Pack,that changes the game to look abit like borderlands 2 cartoon look.
Last edited by donkeymilk on 14 Aug 2013, 15:10, edited 3 times in total.
Top

If you wish to remove the 3D Cel-shading, you must change the settings below.

You can also set the file to read-only, but this is not necessary.